Frequent neglects when using foreign labour in the cleaning sector 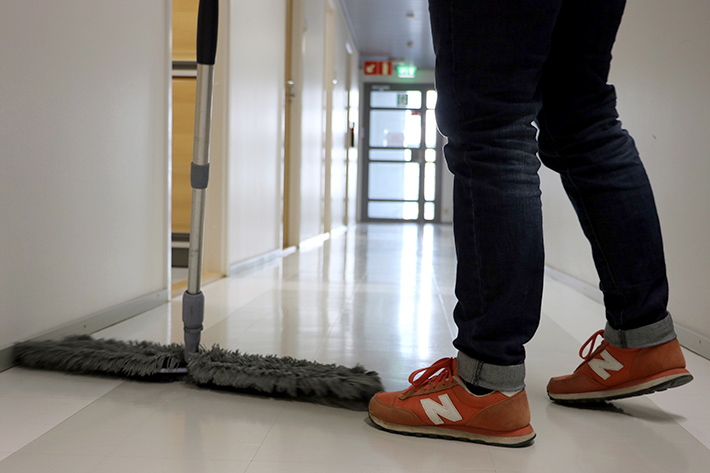 The Foreign Labour Enforcement of the Occupational Safety and Health authority identified several inadequacies regarding the right to work and the wages in the cleaning sector. As for the compliance with the Act on the Contractor´s Liability and the chemical safety there are also several circumstances which need improvement.

No right to work, wages beyond the minimum level

In 2016 132 foreign labour enforcement inspection were carried out in the cleaning sector in Southern Finland. In every fourth inspection, there were foreign workers with no right to work in Finland. For example, in the construction sector and the hotel & restaurant branch the number of workers without right to work were clearly lower.

Moreover; there were often inadequacies when it comes to the wages of the foreign workers. In the cleaning sector only every second employer of those inspected had paid wages in accordance with the generally applicable collective agreement. In most cases the basic wages were below the minimum level. The lowest wages paid were only 5 euro although the minimum wages for 2016 were determined to 10,20 euro.

On some workplaces more work was done than indicated in the Working Hours Register. There were also frequent inadequacies in the payments of evening, night and Sunday supplements.

The cleaning branch also indicated much non-compliance with the Act on the Contractor´s Liability several and the number of neglects had doubled since 2015. More than the half of the contractors inspected had acquired the accounts and certificates only after the contract had been concluded. Neglects were found equally in big and in small companies.

We also inspected the working conditions in the cleaning sector. In the inspections, we determined several inadequacies when it comes to the chemical safety. Often there were no safety data for the detergent products in use indicating for example how to protect oneself against health-hazardous substances.

The employer must analyse the hazards and risk factors and give the employees adequate orientation on how to protect themselves against these. Many employers did not know that detergents are chemicals.

The OSH Division of the Regional State Administrative Agency for Southern Finland is the regional occupational safety and health authority. The OSH Division enforces the compliance of the employers with the laws and provisions concerning working life and that the work is carried out as healthy and safely as possible. In the area, there are 1,1 Mio employees and we enforce approximately 120 000 workplaces.

Please give feedback on this page / Print